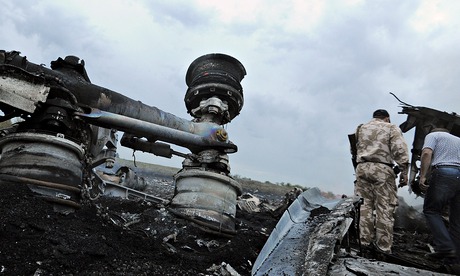 People stand next to the wrecked undercarriage of Malaysia Airlines flight MH17, which was carrying 295 people. Photograph: Dominique Faget/AFP/Getty
.
A notice posted by the UK's Civil Aviation Authority (CAA) on 14 June urged carriers to avoid overflying Crimea and parts of southern Ukraine a month ago due to safety concerns, but they were not ordered to avoid the rest of the country.

Airlines were asked not to overfly Crimea, the Black Sea and the Sea of Azov due to the potential for conflicting air traffic control instructions between Ukrainian and Russian authorities.

It added: "Operations are normal in all other Ukrainian FIRs [flight information regions]."

However, the CAA notice added that UK airlines flying into the Dnepropetrovsk flight region, which includes Donetsk, should "review current security/threat information".

If the first part of the Israeli operation against the Palestinians - air strikes - was predictable, the entry of ground troops into Gaza was always perceived in Israel as undesirable and dangerous, both because of the possible death of Israeli soldiers, and because of the negative reaction of the world community. At this time, the ground operation began within minutes after the crash of a Malaysian "Boeing" when it became clear that the world's attention and the Western media will be focused on what is happening in the Donbass. Which began in the West, and especially in England campaign to demonize the Russian president and all distracted people from what is happening in Gaza.
.
Israel used the collapse of the liner for their own purposes, and some observers suggest that the Israeli leadership knew in advance about the planned crime, focusing on the activities of a large Jewish businessman, now politician, governor of Dnepropetrovsk Igor (Beni) Kolomoyskogo, an active member of the most reactionary Jewish religious organization "Chabad".

They note that "Boeing" led controllers Dnepropetrovsk, they indicated unusual aircraft corridor, moving it to the north, and required him to drop several thousand feet.

However, for the aggression against the Palestinians was another reason ... 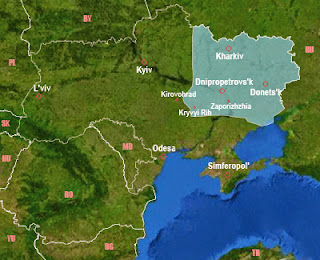