Warships of four major Indo-Pacific democracies - the United States, Japan, Australia and India - will manoeuvre together in the Malabar naval exercise off the Goa coast on Tuesday, the second round of the war games by the QUAD 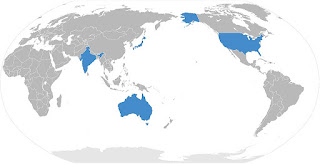 countries over the last month that marks the evolution of the informal ‘QUAD’ partnership into a potential strategic alliance. 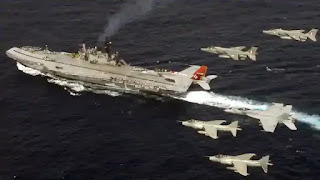 USS Nimitz at 2007 Malabar exercises with Indian Jaguar fighters. China had then issued demarche to all participating QUAD countries plus Singapore(File Photo/Courtesy: US Navy)

India had invited Australia to this year’s war games for the first time in more than a decade, a move that has angered President Xi Jinping’s Communist Party of China government to an extent that its mouthpiece, China Daily chided the Australian government for “aggressively sending warships to China’s doorsteps” as part of Exercise Malabar. India and Australia, however, stayed firm, a sharp contrast from 2007 when several countries that had participated in the naval exercise eventually backed down in face of China’s protests.