Johan Palmstruch had made two failed proposals for the creation of a banking institution in the 1650s before his third proposal, with the addition of a promise to pay half of the bank's profits to the crown, was accepted. King Charles X Gustav thus signed two charters on November 30, 1656 to create an exchange bank and a loans bank.

The first of these (which opened in July 1657) took deposits for a fee (and accruing no interest) with the account owner later able to withdraw the money as cash or to write cheques. The second (which opened at the beginning of 1659) provided loans, financed by the bank owners and secured against property. These two departments were combined in Stockholms Banko with Palmstruch as general manager.

Stockholms Banco was founded in 1657 with Johan Palmstruch (1611 in Riga – 1671; named Johan Wittmacher before he was ennobled) appointed as general manager.

The bank itself was nothing new as it was simply an imitation of the successful public deposit banks of Amsterdam and Hamburg, however Palmstruch himself added two important innovations.

The first of these was to use money deposited into accounts at the bank to finance loans, however this soon became a problem as the deposits were usually short-term and the loans long-term, meaning that deposited money was unavailable to be withdrawn by account holders.

Palmstruch's second innovation, and his solution to this problem, was the introduction in 1661 of Kreditivsedlar ("credit paper"), the first European banknotes, which would be exchangeable at any time for the metal coins they were replacing. These were very successful, but the bank began lending more than it could afford and printed too many banknotes without the necessary collateral, leading to the bank's collapse in 1668.

Palmstruch was charged with irresponsible book-keeping and with not having the cash to repay these credit notes due to miscalculation and omissions in his book-keeping.

He was unable to make up this shortage and in 1668 was sentenced to loss of his title, loss of his banking privilege, and eternal exile or death. The government reprieved the death penalty and Palmstruch was instead imprisoned. 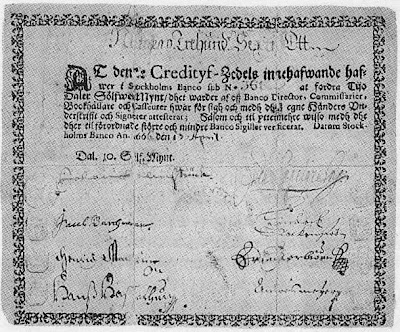 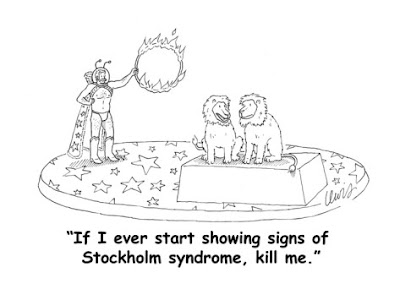 Stockholms Banco (also known as the Bank of Palmstruch or Palmstruch Bank) in Sweden was the first European bank to print banknotes.

It was to be the precursor to the Sveriges Riksbank, the central bank of Sweden.

Johan Palmstruch was born in Riga in 1611. As a young man he moved to Amsterdam but ended up in jail for a few years. He was arrested in 1639 because his creditors declared him insolvent and they feared he might flee the country without paying his debts. After his release however Palmstruch gave another version of the story and asserted he had enough money to settle his accounts. If this were true, other reasons might have been decisive. A plausible hypothesis is economic espionage, especially because later on in his carreer he often referred to the Bank of Amsterdam as example.