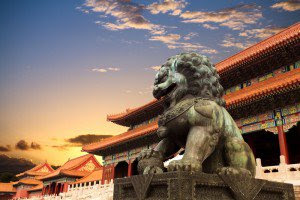 Bitcoin was created to decentralize the economic power of the US Dollar.

The Era of the Red Dragon Begins

Bitcoin is largely an American invention. While no one knows who Satoshi Nakamoto is, it is believed that Satoshi primarily spoke and worked on Bitcoin in English, resided on the west coast, and refined his protocol with the late Hal Finney over six years ago. Yet just 18 months ago, China began to get a taste of the wonders of Bitcoin, and it blew the roof off of the market, driving prices to over $1100 USD within a couple of months. Bitcoin never had that level of fervor as a new currency/investment in the U.S. because Americans have been so privileged as to have the global reserve currency as their national currency. Bitcoin is just a cute speculative investment for Americans. For anyone outside of the U.S., it can represent much, much more. The average Chinese investor quickly saw a decentralized currency not manipulated by the People Bank of China as a wonderful thing and acted on it. The average American should be just as hyped by the invention of economic freedom, but, again, there goes that privileged upbringing again.

The Chinese government got wind of the financial shift in the markets and countered, making Bitcoin persona non grata when it came to banking and regulatory authority. They have also censored Bitcoin rallies and conferences, to keep a lid on Bitcoin’s publicity and level of interest nationwide. Coupled with the Mt. Gox collapse, this started a financial market crash that only now Bitcoin is starting to recover from. This is just a taste of the power China can exert on ANY financial market within a matter of months.

Oddly, restrictions were either navigated around or lessened, and Bitcoin is not seen as an insurgent threat to their national currency, but an online commodity to be traded. Throughout 2014 until the current day, China has increased and maintained a massive market share in Bitcoin. According to global financial giant Goldman Sachs, currently around 80% of all Bitcoin is traded in Chinese Yuan. China has maintained more than 50% of the global Bitcoin market ever since Q4 of 2013, when Bitcoin prices exploded almost overnight. It’s like a light came on; Bitcoin was seen as available for purchase, and a stampede that would make Wal-Mart on Black Friday blush began. You can see below Bitcoin was almost exclusively a US Dollar investment from the beginning, but the US Dollar has faded fast since Chinese found out about it. 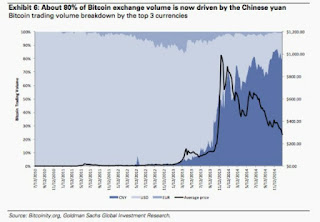 Also read: Life Inside of a Multi-Million Dollar Bitcoin Mine in China

Is this level of interest and dominance a good thing for Bitcoin? You can argue yes, based upon the next section we must discuss, shortly. And having one billion people potentially gravitate towards Bitcoin is better than being dominated by a country a quarter of the size. Or no, since China is a well-established and highly restrictive totalitarian regime that makes the growing “Police State” in the U.S. look like a Cub Scout meeting. You can see a downside, since the People Bank of China, directly run and managed by the Chinese government, has dropped the hammer on Bitcoin investors and owners before. They can do it again. At least in the U.S., the government has carried a “laissez-faire” approach to Bitcoin due to corporate business interest and a need for tax revenue by the government. American greed and fascism have gone a long way in protecting Bitcoin in the West.

Also, American legislation has defended Bitcoin well. The Citizens United Case has made the legal precedent of money as a form of speech and information, which has huge ramifications for Bitcoin. If the U.S. Government wants to ban Bitcoin, they risk creating a solid legal precedent that Bitcoin is money and is a legal form of information and speech in accordance with Constitutional law and current legal constructs. Not a road any government bureaucrat wants to head down. Plus, Bitcoin is used in religious tithings as donations, and there are many American laws protecting the freedom of religion. And politicians also have little incentive to attack Bitcoin, as they can now legally get donations in Bitcoin via a judgment by the Federal Election Commission, so why close a potential long-term stream of income? Politicians love getting bought off, so Bitcoin is on pretty solid legal ground in the fifty States.