A male convert to Judaism is referred to by the Hebrew word ger (Hebrew: גר‎, plural gerim) and a female convert is a giyoret. The word is related to the term "proselyte" which is derived from the Koine Greek Septuagint translation of the Bible. In Karaite Judaism a Ger is a non-Jew who has yet to fully convert to Judaism. After a Ger converts to Judaism, they are no longer considered a Ger but a full-fledged Jew.[8]

The word ger comes from the Hebrew verb lagur (לגור) meaning "to reside" or "to sojourn [with]". In the Hebrew Bible ger is defined as a "foreigner", or "sojourner."[9] Rabbi Marc Angel writes:
"The Hebrew ger (in post-Biblical times translated as "proselyte") literally means "resident" and refers to a non-Israelite who lived among the Israelite community. When the Torah commands compassion and equal justice for the ger, it is referring to these "residents." Rabbinic tradition interpreted the word ger as referring to proselytes..."[10]

Angel's explanation of the literal meaning of "ger" as alien is borne out in biblical verses such as Lev 19:34:

As a citizen among you shall be the ger (foreigner) who lives among you, and you shall love him as yourself, for you were gerim in the land of Egypt—I am the Lord your God.

The Jews were not converts in Egypt, but rather foreigners. Another passage which may be relevant to a process of conversion involves non-Jewish women captured in war who could be adopted forcibly as wives (Deuteronomy 21:10–14). Another verse which has been interpreted as referring to non-Jews converting to Judaism is Esther 8:17, although no process is described. (Esther 8:17).

In the Talmud, "ger" is used in two senses: ger tzedek refers to a "righteous convert", a proselyte to Judaism, and ger toshav, a non-Jewish inhabitant of the Land of Israel who observes the Seven Laws of Noah and has repudiated all links with idolatry.[11] In Modern Hebrew, ger refers to a convert to Judaism.[12

The word is related to the term "proselyte"...

The biblical term "proselyte" is an anglicization of the Koine Greek term προσήλυτος/proselytos, as used in the Greek Old Testament for "stranger", i.e. a "newcomer to Israel";[1] a "sojourner in the land",[2] and in the Greek New Testament[3] for a first century convert to Judaism, generally from Ancient Greek religion. 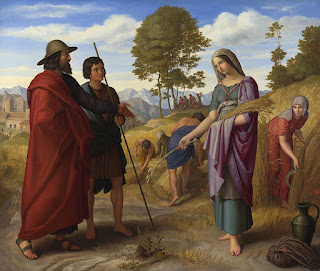