The Islamization of Britain in 2016

The Islamization of Britain in 2016

"The realistic future for Britain is Islamic."

by Soeren Kern
January 9, 2017 at 5:00 am
https://www.gatestoneinstitute.org/9741/islamization-britain
Translations of this item:
The Muslim population of Britain surpassed 3.5 million in 2016 to become around 5.5% of the overall population of 64 million, according to figures extrapolated from a recent study on the growth of the Muslim population in Europe. In real terms, Britain has the third-largest Muslim population in the European Union, after France, then Germany.
The growth of Britain's Muslim population can be attributed to immigration, high birth rates and conversions to Islam.
Islam and Islam-related issues, omnipresent in Britain during 2016, can be categorized into five broad themes: 1) Islamic extremism and the security implications of British jihadists in Syria and Iraq; 2) the continuing spread of Islamic Sharia law in Britain; 3) the sexual exploitation of British children by Muslim gangs; 4) Muslim integration into British society; and 5) the failures of British multiculturalism.
JANUARY 2016
January 3. A jihadist with a London accent appeared in an Islamic State propaganda video after the group executed five men accused of spying for the UK. The masked gunman warned Prime Minister David Cameron that the West could never defeat the Islamic State. The video also showed a young boy, aged around four and with a British accent, threatening to kill non-Muslims.
January 4. British officials traveled to Sudan to stanch the flow of UK-born medics joining the Islamic State. More than a dozen British doctors studying at Sudan's University of Medical Sciences and Technology (UMST) have joined the Islamic State to treat jihadists in Syria. Parents said they had sent their children to study in Sudan to reconnect them with their African and Islamic roots before returning to practice medicine in Britain.
January 4. The Jamiatul Ummah School in Tower Hamlets, East London, failed an inspection when investigators from Ofsted, the official agency that regulates British schools, found extremist material in its library, including books that call for stoning women.
January 5. Pastor James McConnell, a 78-year-old pastor from Belfast, was cleared of charges that he violated the Communications Act 2003 when, in a sermon broadcast on the internet, he described Islam as "heathen," "Satanic" and "a doctrine spawned in hell." Judge Liam McNally said: "The courts need to be very careful not to criticize speech which, however contemptible, is no more than offensive. It is not the task of the criminal law to censor offensive utterances."
January 6. A man and a woman were arrested on suspicion of terrorism after attempting to board a UK-bound flight with fake Belgian passports. The pair, understood to be brother and sister, were arrested at Cristoforo Colombo Airport in Genoa, Italy, while trying to board the flight. Fears were raised that the pair, who claimed to be Syrian refugees, might be jihadis after police found violent images on their smartphones.
January 6. A House of Commons briefing paper on polygamy revealed that recent reforms to the social security system would allow migrants in polygamous marriages to claim additional benefits payments. Although polygamy is illegal in Britain, some 300,000 people are believed to be living in such unions in the country.
January 6. The Joint Council for Qualifications (JCQ), which represents examination boards in England, Wales and Northern Ireland, reached an agreement with Muslim groups to reschedule crucial exams during the next three years to avoid clashing with Ramadan, when observant Muslim pupils would be expected to fast.
January 8. A Muslim woman who claimed she was assaulted in downtown Birmingham for wearing a hijab days after the Paris attacks was fined after video footage proved she fabricated her story.
January 8. Islamic extremists were allowed to tour British universities unchallenged, even though universities and colleges are legally required to prevent extremists radicalizing students on campus, according to the Daily Mail.
January 9. The Criminal Cases Review Commission, an official government body, was found to be helping asylum seekers overturn their convictions for illegal entry to Britain in order to allow them to receive refugee status and remain in the UK. MPs said the practice could "undermine deterrence" and lead to thousands more illegal arrivals.
January 15. London Police released video footage of a hijab-clad woman who tried to stab a 15-year-old boy on a bus in Lambeth.
January 16. Foreign Secretary Philip Hammond revealed that some 1,500 Britons tried to join the Islamic State since 2012. An estimated 800 people, mostly jihadists and family members, successfully entered Syria; roughly half are still there. Another 600 were stopped, either as they tried to leave Britain, or after arriving in Turkey.
January 18. Prime Minister David Cameron announced a plan to invest £20 million (€33 million; $28 million) in English classes for Muslim women to reduce the risk of extremism. He said migrants to Britain who cannot pass an English test within 2-1/2 years of arriving may not be allowed to stay. British Muslim groups accused Cameron of demonizing their communities.
January 19. Muhammad Shamsuddin, a 39-year-old London-based Islamist, was featured in a new documentary called "The Jihadis Next Door." Shamsuddin, a divorced father of five who lives on state handouts and claims he cannot work because he has "chronic fatigue syndrome," was filmed preaching hate against non-Muslims on British streets. 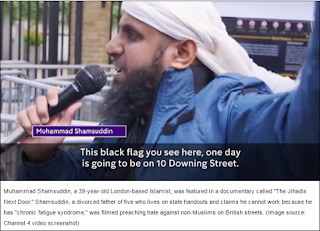 
"The previously unthinkable has become the present reality. A Muslim man with way too many extremist links to be entirely coincidental is now the Mayor of London. In a couple more decades Britain may well have its first Muslim Prime Minister. Reality cannot argue with demographics, so the realistic future for Britain is Islamic."


"The adhan, or Islamic call to prayer, is an integral part of the Muslim faith. The number of people practicing the religion of Islam in the United Kingdom exceeds three million. Some neighborhood towns have more than 50% Muslim population. I believe it is the right time to ... allow highly Muslim populated areas with a loud call for prayer at least three times a day."


Soeren Kern is a Senior Fellow at the New York-based Gatestone Institute. He is also Senior Fellow for European Politics at the Madrid-based Grupo de Estudios Estratégicos / Strategic Studies Group. Follow him on Facebook and on Twitter.