German (n.)
"Teuton, member of the Germanic tribes," 1520s (plural Germayns attested from late 14c.), from Latin Germanus, first attested in writings of Julius Caesar, who used Germani to designate a group of tribes in northeastern Gaul, origin unknown, probably the name of an individual tribe.

The English word Germany derives from the Latin Germania, which came into use after Julius Caesar adopted it for the peoples east of the Rhine. 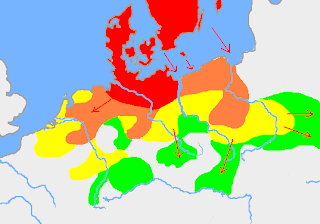