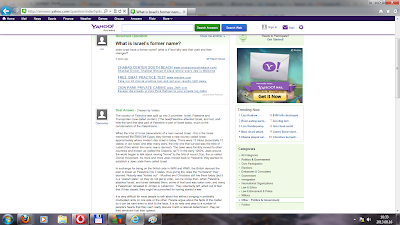 What is Israel's former name?

The country of Palestine was spilt up into 3 countries: Israel, Palestine and Transjordan (now called Jordan). (The new)Palestine attacked Israel, and lost, and now the land that was part of Palestine is part of Israel today, much to the consternation of the Palestinians.

When the tribe of Israel (decendants of a man named Israel - this is the Israel mentioned the Bible) left Egypt, they formed a new country called Israel, approximately where modern day Israel is today. There were 12 tribes (essentially 12 states) in old Israel, and after many wars, the only one that survied was the tribe of Judah (from which the name Jew is derived). The Jews were forcibly moved to other countries and broken up (called the Disporia, sp?). In the early 1900's, Jews around the world began to talk about moving "home" to the hills of mount Zion, the so called Zionist movement. As more and more Jews moved back to Palestine, they wanted to establish a Jews state there called Israel.

In exchange for being on the British side in WWI and WWII, the British devised the plan to break up Palestine into 3 states, thus giving the Jews the "homeland" they desired. Nobody was "kicked out" - Muslims and Christians still live there today (but it is a "Jewish state", so they do not get to vote). Let me revise that - when Palestine attacked Israel, and Israel defeated them, some of that land was taken over, and many a Palestinian retreated to Jordan or Lebannon. They volentarily left, albeit out of fear that if they stayed, they might be punnished for having started a war.

It is very difficult for most people to talk about this without bringing in politically modivated rants on one side or the other. People argue about the facts of the matter, so it can be hard even to stick to the facts. It is so near and dear to a number of people's hearts that they can't really discuss it with a rational detachment - they let their emotions fuel their speech. 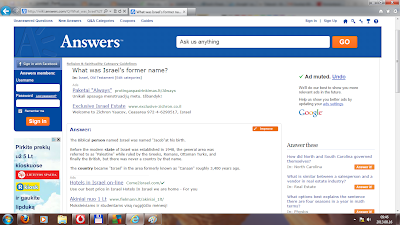 What was Israel's former name?

Before the modern state of Israel was established in 1948, the general area was referred to as "Palestine" while ruled by the Greeks, Romans, Ottoman Turks, and finally the British, but there was never a country by that name.

The country became "Israel" in the area formerly known as "Canaan" roughly 3,400 years ago. 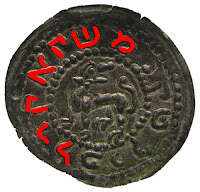 Israel is a Biblical given name. The patriarch Jacob was given the name Israel (Hebrew: יִשְׂרָאֵל, Standard Yisraʾel Tiberian Yiśrāʾēl; "Triumphant with God", "who prevails with God") after he wrestled with the angel (Genesis 32:28 and 35:10) The name already occurs in Eblaite and Ugaritic texts as a common name. Commentators differ on the original literal meaning. Some say the name comes from the verb śarar ("to rule, be strong, have authority over"), thereby making the name mean "God rules" or "God judges". Other possible meanings include "the prince of God" (from the King James Version) or "El fights/struggles". "The Jewish Study Bible" of Oxford University Press says on page 68 "The scientific etymology of Israel is uncertain, a good guess being '[The God] El rules.'" Jacob's descendants came to be known as the Israelites, eventually forming the tribes of Israel and ultimately the kingdom of Israel, from whence the name of modern day Israel.

In Israel the name "Israel Israeli" is sometimes used to mean someone whose name is unknown or unspecified. 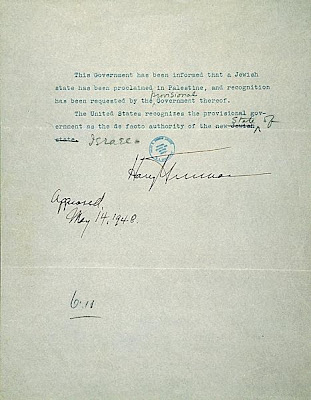 British, Arab, and Jewish reactions to the recommendations were not favorable. Jewish terrorism in Palestine antagonized the British, and by February 1947 Arab-Jewish communications had collapsed. Britain, anxious to rid itself of the problem, set the United Nations in motion, formally requesting on April 2, 1947, that the U.N. General Assembly set up the Special Committee on Palestine (UNSCOP). This committee recommended that the British mandate over Palestine be ended and that the territory be partitioned into two states. Jewish reaction was mixed -- some wanted control of all of Palestine; others realized that partition spelled hope for their dream of a homeland. The Arabs were not at all agreeable to the UNSCOP plan. In October the Arab League Council directed the governments of its member states to move troops to the Palestine border. Meanwhile, President Truman instructed the State Department to support the U.N. plan, and, reluctantly, it did so. On November 29, 1947, the partition plan was passed in the U.N. General Assembly.

UN Resolution 181, defined the outline of a settlement in Palestine creating both a Jewish and a Palestinian homeland. The 1947 UN Partition divided the area into three entities: a Jewish state, an Arab state, and an international zone around Jerusalem.

At midnight on May 14, 1948, the Provisional Government of Israel proclaimed the new State of Israel. On that same date the United States, in the person of President Truman, recognized the provisional Jewish government as de facto authority of the new Jewish state (de jure recognition was extended on January 31). The U.S. delegates to the U.N. and top ranking State Department officials were angered that Truman released his recognition statement to the press without notifying them first. On May 15, 1948, the Arab states issued their response statement and Arab armies invaded Israel and the first Arab-Israeli war began.